Dark matter is one of the major drivers of cosmological structure formation and galaxy evolution, but we know little about its properties, apart from its total mass fraction in the universe and gravitational interaction with normal matter (gas and stars; baryons).

Lacking direct measurements in the laboratory nowadays, we can only probe dark matter on a much larger scale: galaxy rotation and dispersion. Indeed, the strongest evidence is flat rotation curves in many galaxies, including the Milky Way, which need an enormous amount of invisible matter spreading throughout galaxies and the surrounding regions, i.e. dark matter.

However, since stars and gas can also shape the dark matter distributions, we need a better understanding of the mutual interactions between the visible and invisible components before constraining the properties of dark matter.

With high resolution cosmological zoom-in simulations of a wide mass range of galaxies, from dwarf to MW-mass galaxies, we show baryons play a major role in galactic dark matter distributions:

We show the first effect is most efficient at stellar mass ~ 1e8-9 Msun and the second effect is only important at stellar mass >>1e9 Msun. Then we explain how we resolve the recent tensions between galaxy observations and the cold dark matter paradigm.

(2) Core Creation and Baryonic Contraction act against each other. It is interesting that m12v and m12i tried to build up a dark matter core at z~1, but failed due to the contraction of baryonic mass at the center. 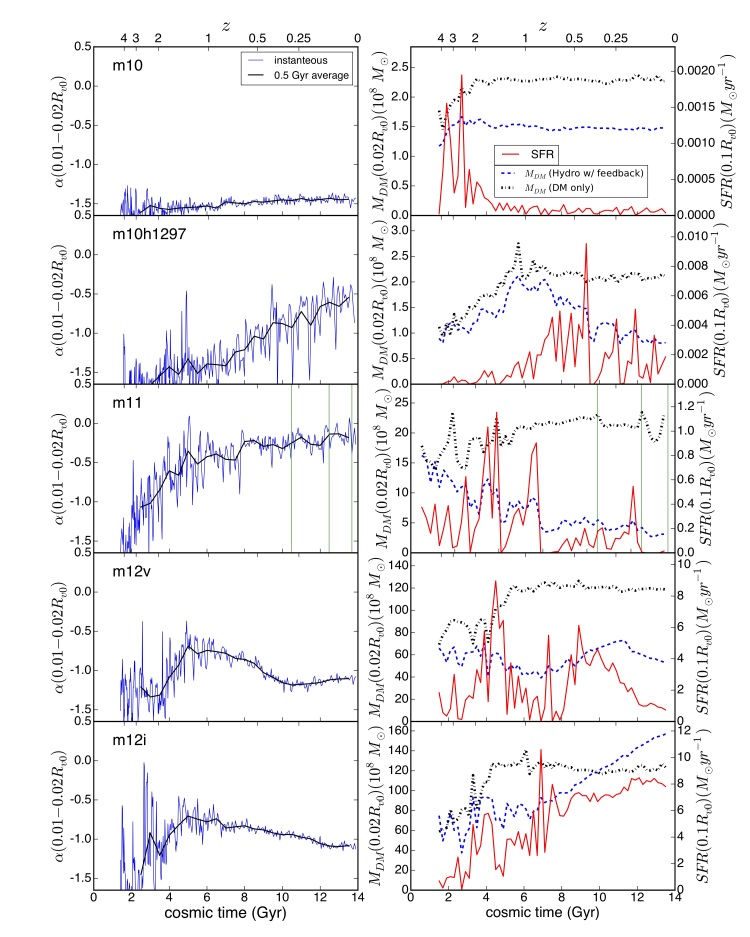 Simulations with stellar feedback matches observations much better than dark matter-only simulations (which is similar to the red dotted lines). α is the logarithmic slope of the dark matter halo measured between 300-700 pc.

Too Big To Fail?

Observations show there are too few satellite and Local Group galaxies with high central masses compared to the dark matter-only simulations.

Check out the presentation and our paper for details.

Slides from the talk: presentation_dm

Our poster presented in AAS meeting.

The arXiv link to our paper.

The paper is published on MNRAS.